We will look at the most typical and common symptoms of Alzheimer’s in elderly people.

As a caregiver or a relative, you need to be aware of these so you can take action early enough.

As soon as you start working on getting a senior to see a doctor and they prescribe an appropriate treatment, the easier the process.

Even if you think (or believe) sudden changes in behavior are due to old age, think again. With more and more people getting diagnosed with dementia (and Alzheimer’s disease is the most common cause), you should take thing seriously enough.

There are about ten million new cases of dementia each year worldwide. Old people of the age sixty and beyond are those who are affected the most commonly.

However, dementia and Alzheimer’s disease appear in a much younger population, too.

What’s even more shocking, Alzheimer’s disease is one of the top leading causes of death in older adults. And the numbers keep on increasing due to the fact that there is still no cure for dementia.

But there are different treatments that lessen the impact, which is why you must be aware of the symptoms first and foremost.

Most Typical Symptoms of Alzheimer’s in Elderly Scientists haven’t fully established the root cause of Alzheimer’s disease in relation to how it affects different people.

The condition is generally attributed to genetic components that are responsible for triggering the early-onset symptoms and a series of complex changes in the brain over time which results in late-onset Alzheimer’s.

One of the earliest symptoms of Alzheimer’s in elderly people presents itself as misplacing belongings.

It could be things like forgetting where to store items or placing things where they don’t belong. In the case of elderly people, it’s often thought of as a sign of aging and easily dismissed. Age is a contributing risk factor when it comes to the prevalence of Alzheimer’s disease as noted between people who are 65 to 85 years old.

Research suggests that the incidence of Alzheimer’s doubles every five years after the age of 65.

However, the disease does not correlate directly with aging but the odds of diagnosis is higher in older people. That is why signs like problems with forming new memories are hard to discern because several other issues related to aging have often become prominent by that time.

The illness, in general, affects the brain process and a person’s ability to form new memories. Abnormal plaques and tangles that develop as we age have been linked with the damaging and ultimate demise of the brain’s nerve cells.

Plaques refer to deposits of protein fragments known as beta-amyloid which may build up within nerve cell spacings over time. Tangles are twisted fibers of a different kind of protein known as tau.

Alzheimer’s affects most regions of the brain which in turn affects thinking, memory, judgment, problem-solving, language, behavior, and movement.

Confusion is yet another symptom of Alzheimer’s in elderly people that is often attributed to the aging process.

It affects someone’s ability to perceive places and also perceive the passing of time. They might forget what’s typical and also forget simple things like the day of the week. As the damage developed by the brain cells worsens, it affects a person’s ability to organize their thoughts and express themselves. The disease begins to attack the brain cells long before the symptoms of Alzheimer’s in elderly people become apparent.

The pre-clinical stage is only discernable in research settings but the mild cognitive impairment that follows comes with signs related to diminished thinking and memory skills.

A person with Alzheimer’s disease often has challenges performing complex tasks that require critical thinking. Much like misplacing belongings, they might forget what numbers are for or have trouble co-relating the written digits with their corresponding names.

Someone with the disease also starts having challenges with things they often did with ease like balancing a checkbook. At some point, when the damage to the brain cells continues to worsen a person with Alzheimer’s develops moderate dementia.

The person becomes more confused and their forgetfulness also becomes heightened. It’s at this stage that they start having more challenges with activities of daily living, including things like grooming.

The period is marked by confusing names and even the inability to recognize friends or family members.

For the elderly, this is the point when they begin to wander around more, searching for places that feel familiar. The conditions make it unsafe to leave them alone and they start requiring a given level of assistance. Yet another symptom of Alzheimer’s in elderly people that is often confused with the natural aging process is the inability to communicate coherently.

As people age, it’s often typical for them to start speaking at a slower speed. People with Alzheimer’s often have trouble finding the simplest of words to express what they intend and they may substitute them with unusual words.

It makes both their written and spoken speech much harder to understand. They may want to find a hairbrush and refer to it as “that thing for the head,” which might seem odd or unusual of them particularly if they are the ones who misplaced the item in the first place. Some people might start having challenges with processing visual information pointing out to the possibility of the disease.

Problems are quite common, particularly in the case of people who develop cataracts during the aging process.

The change comes through as problems with reading, determining color, and judging distance. Given that different areas related to vision could develop sudden lapses, a person with Alzheimer’s might also have trouble perceiving movement as well as issues with their peripheral vision.

These are all things that pose a great problem when driving and signal that it’s time for the person to stop operating any type of machine. The tricky little tasks most of us take for granted like threading a needle, writing neatly, and buttoning a shirt all become problematic to someone with Alzheimer’s.

In the same way memory loss associated with remembering information affects people with the illness, they also suffer from muscle memory loss.

It refers to a diminished ability to make use of motor skills when the part of the brain that communicates with the muscles becomes damaged.

It’s visible through aspects like taking shorter steps with a shift to a particular side. Numbness experienced in the extremities can also signal the disease. Insomnia is another symptom of Alzheimer’s in elderly people marked by shifts in patterns of sleeping.

However, the sleep issues one person develops may vary from what someone else with Alzheimer’s experiences.

It could be problems with falling asleep in the first place or conversely sleeping more than usual.

Often, the day/night sleep cycle suffers, resulting in the Sundowner Syndrome. It’s noticeable by the sudden increase in the length or number of day time naps.

At the same time, experts attribute it to one of the normal changes that come with aging but it’s safe to bring it to a physician’s attention. 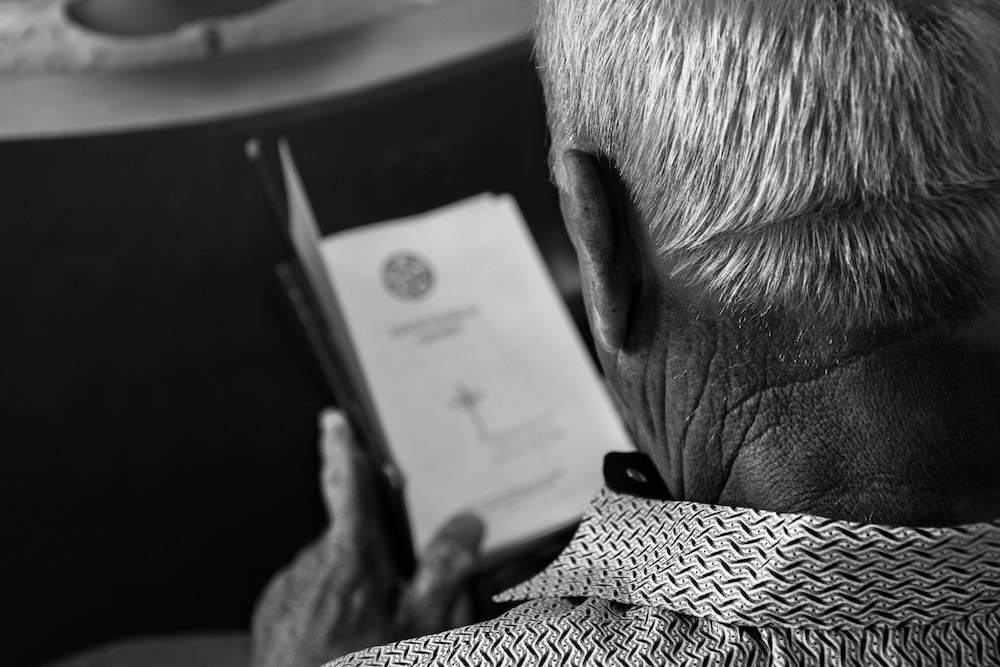 Whether due to apathy or increased forgetfulness, poor grooming and hygiene are among the other symptoms of Alzheimer’s that are noted in the elderly.

It’s more apparent in individuals who often take good care of their appearance and all of a sudden start looking disheveled. You can identify it through aspects like a senior wearing the same clothes several days consecutively.

Poor or lack of grooming also becomes more apparent as the condition progresses and affects a person’s motor skills. There is a tendency to notice that most seniors seem forlorn or less enthusiastic about life in general. Often, it’s even more evident in older adults who are suffering from terminal medical conditions.

People with Alzheimer’s experience the same symptoms marked with mood or behavior changes.

It is always inverse behavior, for instance, someone outgoing suddenly becomes withdrawn and another person known to keep to themselves might suddenly embrace an outgoing personality.

Anger and aggressive tendencies are also exhibited by people with Alzheimer’s when it’s unnecessary and appears out of line.

It all often comes from feeling extremely confused, suspicious of others in unfamiliar surroundings, and experiencing heightened anxiety. Someone with the condition may feel out of their comfort zone and start being wary, suspicious, and distrustful about those around them.

They might also start seeing, hearing, smelling or even tasting things that don’t really exist.

Experiencing any of these symptoms whether in a woken state or when asleep isn’t usual by any account and seeking medical treatment could lead to an Alzheimer’s diagnosis.

The fact that it’s also a symptom that is characteristic of other conditions like schizophrenia could also lead to a false diagnosis. It’s unfortunate that Alzheimer’s, just like other neurodegenerative conditions, doesn’t have a cure. The conditions progressively worsen and soon enough, the person suffering from it loses their physical functions entirely.

That includes being bedridden and losing the ability to see, hear, or talk entirely.

It’s difficult to assess individual prognosis due to how the disease affects every individual differently and in the course of an indeterminate period before conclusive diagnosis.

Life expectancy after a diagnosis is roughly seven years; fewer than 3% of people who are diagnosed with Alzheimer’s live past fourteen years.

The best that doctors can do following diagnosis is to manage the symptoms to the best of their abilities. One of the symptoms of Alzheimer’s in the elderly is the fact that they keep on asking the same question over and over again. If you are blind to their condition, this may annoy you what can get you to react inappropriately towards them.

With this, you create even more tension in the person with Alzheimer’s disease, which can end up with irrational behavior. With that in mind, keep calm if the older adult asks the one question for the tenth time.

One thing you need to understand is that they, very likely, are unaware of the repetitive questioning.

If you have not already taken them to the doctor, now is the right time to seek help from a practitioner. It is very common that a person with Alzheimer’s disease starts experiencing poor judgment. This can affect all sorts of different aspects of one’s life.

For instance, they cannot make the right decision when it comes to money anymore. They do not have control over the money, payments and cost, paying less or giving away more money. It is sad that some people then start taking advantage of the latter.

Moreover, it is also widespread that an individual begins forgetting about taking care of themselves.

From washing themselves and their teeth to taking care of their clothes and other whatnot, hygiene becomes a struggle.